As 2020 wore on, we grappled with rapid, seemingly relentless upheaval.

Events we would normally look forward to, from gatherings with friends to big Thanksgiving dinners, were replaced by an exhausting, often isolating sameness.

As our orbits grew smaller, we found new ways to break the monotony of the hours, days, and weeks. To mark the passage of time in a year we need to remember even as we want to forget. 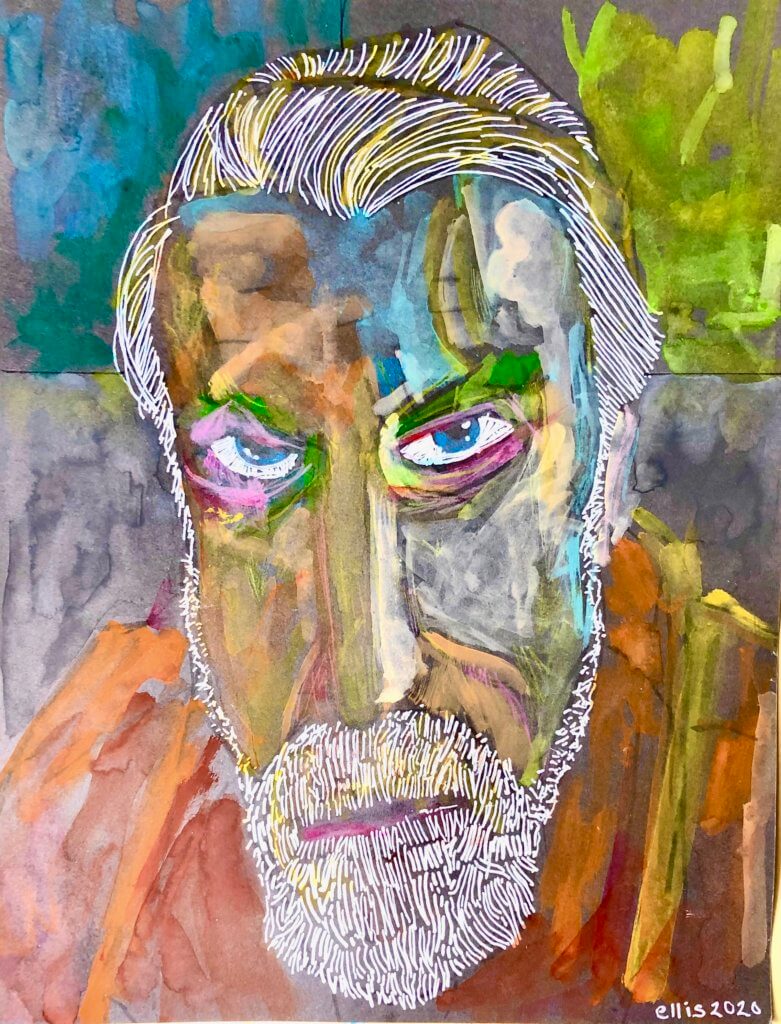 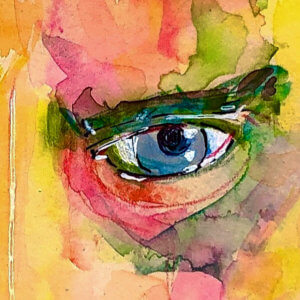 I began with the simple prompt,
'When did this become real for you?' 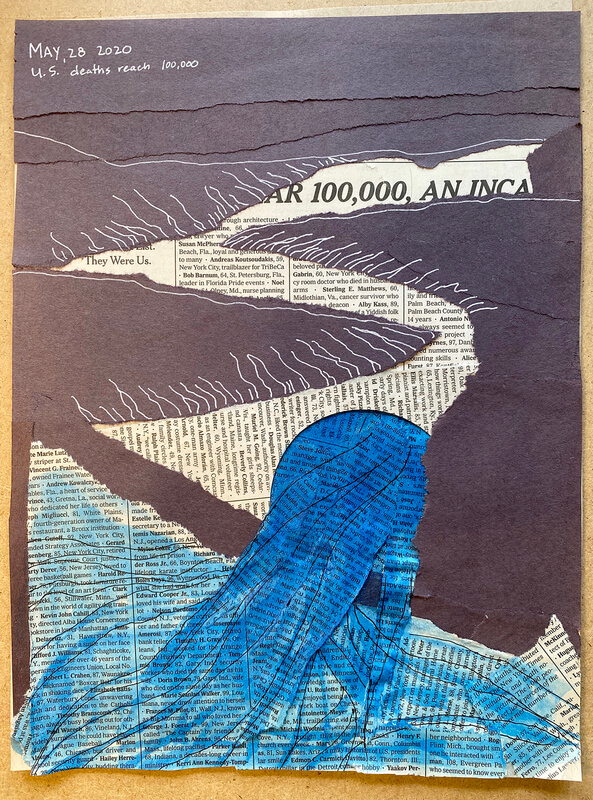 “Inspired by Lynda Barry’s COVID diary, which appeared in the New York Times in May, I decided to keep my own collage diary. I began with the simple prompt, ‘When did this become real for you?’ I never could have imagined all of the unlikely and devastating events that were to unfold in the coming months. So many deaths: George Floyd, Breonna Taylor, Ruth Bader Ginsburg, John Lewis. So many unbelievable and terrifying things were happening—fires in California, a mass death of pilot whales, violence against protestors, political strife, and always the numbers of COVID dead kept mounting. This pandemic has touched so many that no one can remain unaffected—I’m including a few pages from May and July as an example. The “old” normal was never really fair. One hopes that the “new” normal, whatever form that might take, will be more just, but there is never any guarantee unless we fight for it.”

All of Kuhlman’s collage diary pages are available through Bryant University, where she is a professor of comparative literature. The May 28, 2020 collage is also featured in the RI COVID-19 Archive.

"I filled my automobile with disinfectant, masks and rubber gloves, wrapped in my own cocoon, and began to walk." 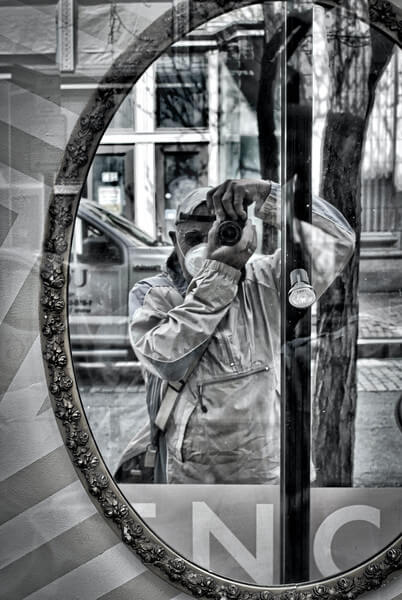 Previous
Next
From the artist

“For many years I have been inspired by, and still turn to, the great masters who documented the Dust Bowl. Working under the direction of Roy Stryker of the Farm Security Administration, a group of incredible photographers set out to record the human, natural, and economic devastation of that event in 1939. If you have not seen the work of Walker Evans, Dorothea Lange, Marion Post Walcott, John Vachon, Russel Lee and the great Arthur Rothstein, I urge you to look.

I have been trying to make photographs since 1967, at the age of 15. Now, close to 69 years old with 54 years of photography behind me, I continue to try. Considering the influence that the above greats had on my love of photography I felt the strong desire to attempt the documentation of our shared condition.”

Some of Alan Roseman’s photographs are also featured in the RI COVID-19 Archive.

As my days were limited to walks in my neighborhood, I was drawn to the ocean on weekends.

“The artwork I have been making in 2020 explores my connection to my home and community during a time of isolation. As my days were limited to walks in my neighborhood, I was drawn to the ocean on weekends. The smell, air and beauty of the ocean brought me peace. The expanse of the ocean, the antidote to the confines of my neighborhood. This piece focuses on those coastal walks, It was created using an ikat technique and dyed in indigo. It was handwoven using yarn repurposed from previous projects and reeds gathered at the beach.” 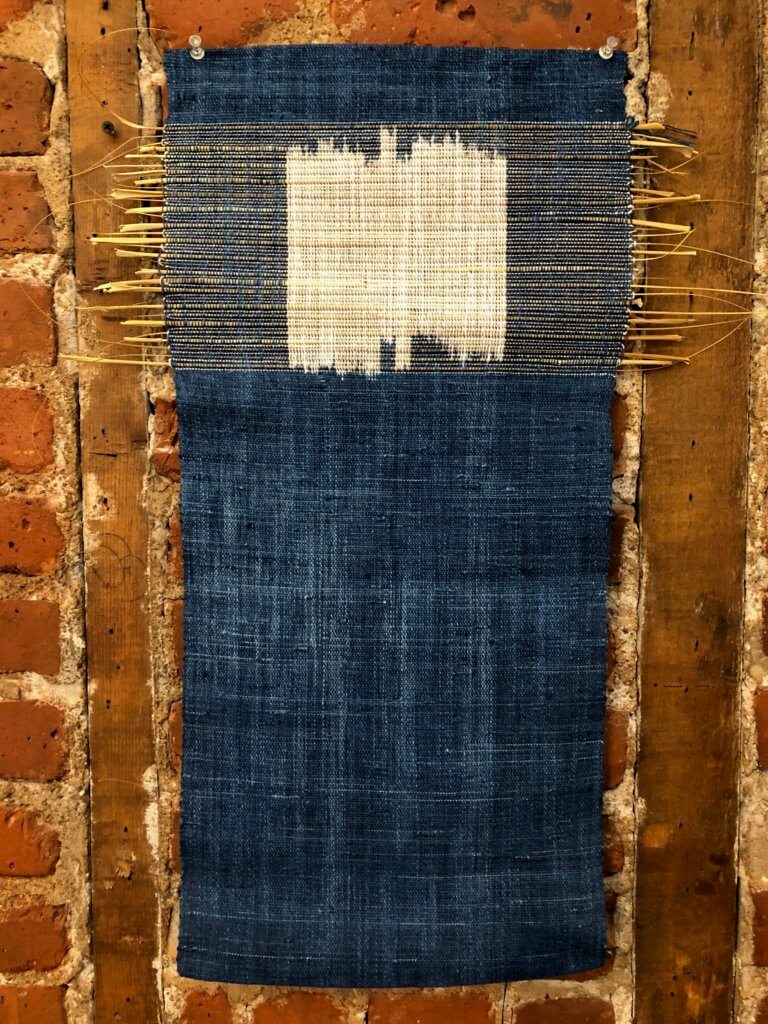 I was my own muse, model and photographer. I could only use what was in my house.

“Mid March, when everything started to close down, I was diagnosed ‘elderly,’ I decided to isolate myself. I stopped daily hair washing, a necessity when I went to the YMCA everyday and swam. After a few days I gave my hair a good brushing (BTW I have naturally curly hair) and not for the first time in my life did the name Roseanna Roseannadanna come to my mind. I picked up my iPhone and took a picture, found one of RR and texted this to my kids with the title ‘Hair Impersonation.’  For the next few days I played with my hair and sent my kids texts of my ‘Daily Hair Impersonation.’  Sadly my hair’s talent was limited, when it ran out I wasn’t ready to stop, I was committed.

I was my own muse, model and photographer, I could only use what was in my house.  I upgraded from my iPhone to my iPad and eventually my son reminded me that it had a 10 second delay, what a life saver!! I would go into my guest bedroom, now ‘art studio,’ and in the crowded space work on my impersonations, take the photo, or I should say photos, so many deletes, and hours later another day in isolation would be over. I’d forgotten how much stuff I’d saved – linens, scarves, my mother’s wedding gown, her cocktail dresses, her costume jewelry, my own wedding gown (OMG it still fit) my dad’s garden implements etc etc.

Spread dough in a seasoned pan

tomatoes, salt them, pepper them,

reminded me to spread tomato

and cheese all the way to the outside edge.

Sprinkle of olive oil and bake

for twenty-one minutes, not less,

that’s her way. After removing

be certain (though you will not want to)

wait five minutes before you cut and eat

or else hot oily cheese will flash-burn

a layer of skin from the roof

of your mouth. A dentist once told me

the gums, the delicate soft inside

a mouth is the fastest healing

the pain, though the burn will heal

in a matter of forty-eight hours,

minutes. This is the way

an exponential process works. This is the way

the universe     is teaching me 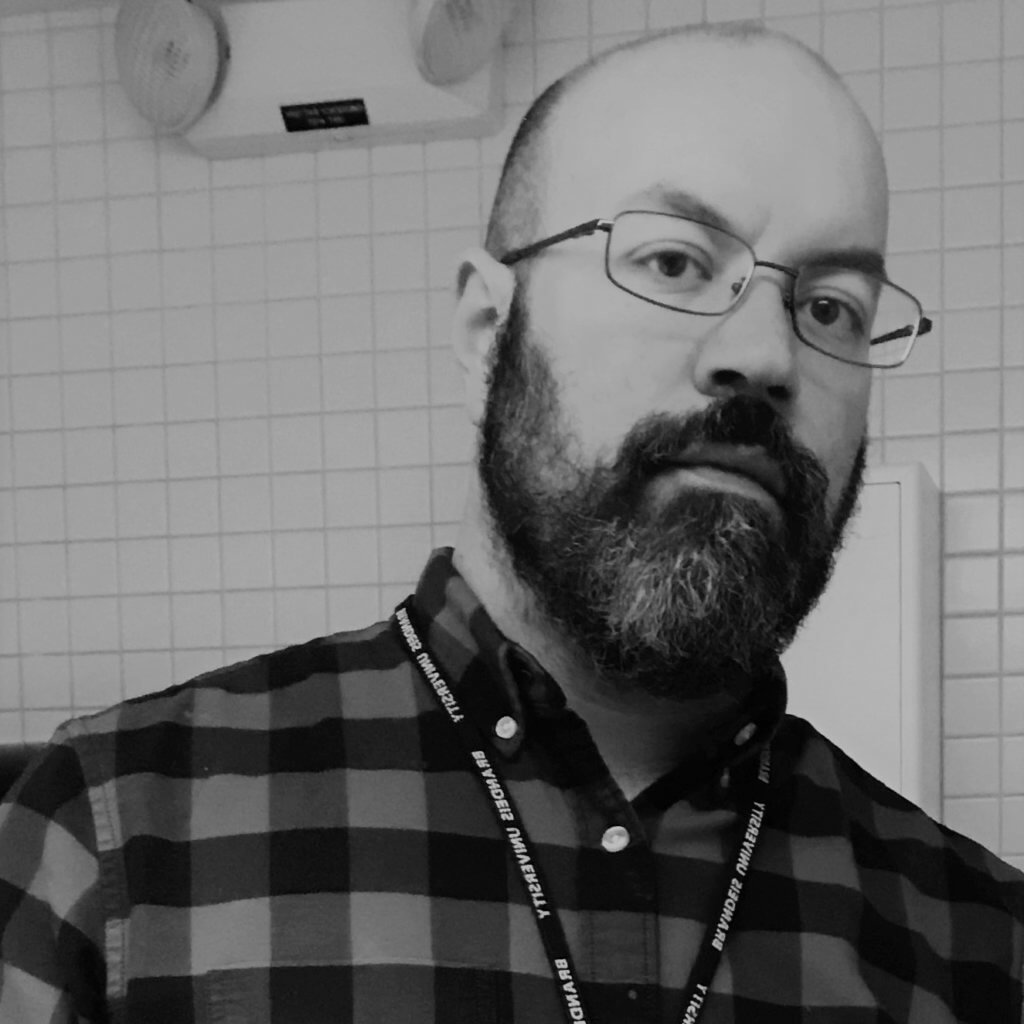 A Rhode Island native, Anthony DiPietro earned his MFA from Stony Brook University and now serves as associate director of the Rose Art Museum in Boston. His poems and essays have appeared in Notre Dame Review and numerous other journals and have won fellowships and residencies.

No flour to be found

“People are buying up baking supplies online and at the grocery store, whipping up big batches of soup at home, and even planning vegetable gardens. Local food advocates are hoping the trend sticks.”

“For my 40th birthday I drew from midnight to midnight on April 29th, 2020, and streamed it live on Twitch. This is an hourly comic documenting it! It was part of the Providence Public Library’s Adaptive Practices series.” 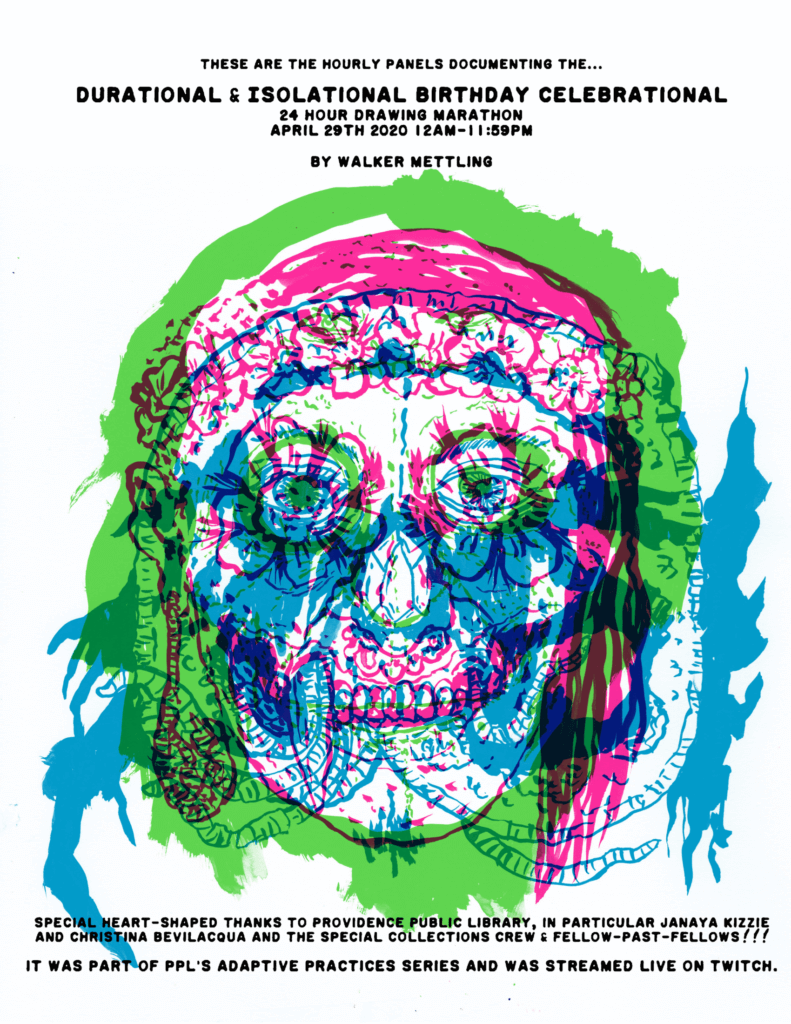 WindOpus is a project born out of the apparent isolation we found ourselves in at the outset of a global pandemic. The pieces score our own shared emotional turmoil. These pieces are designed to be played together, even if we must be separated.

WindOpus is a body of work that may be performed using five windows of a building as point sources for sonic emanation.  Performers of WindOpus self-conduct a set of timed durational concerts, using their own means and resources in the isolation of separate rooms.

In March and April of 2020, a dozen unique WindOpus compositions were written and performed by Joe DeGeorge, Brian Folan, and Andre Arsenault.  The performances took place at sunset and were conducted from the third floor windows of AS220’s Empire Street building.  Several of these performances were captured on video by Lyza Baum.  In November of 2020 a DVD containing a few of these videos was produced to loop on a cathode ray tube television on display in a window at AS220 alongside printed versions of the WindOpus scores.

WindOpus upon completion will consist of 24 or more separate compositions, to be composed in each of the major and minor keys of a 12 tone even tempered scale.

WindOpus pieces as performed by their initial creators make use of synthesizers, music software, keyboards, saxophone, and drums, as well as other items that may be available to the performers.  Some elements performed out of windows include pre recorded elements, while others are improvised while adhering to the instructions written in the score.

I am primarily an outdoor landscape artist who paints in watercolor, but because much of 2020 has been spent at home my eyes have been focused on the life within our house.

“We lost a dear family pet a few months back. In the aftermath I instinctively began filling up our sunniest window with houseplants, I needed something to nurture in our pup’s absence.

Although I am primarily a watercolorist,  I have also developed an interested in working digitally. I recently upgraded to an iPad Pro and Apple Pencil. The new hardware has rekindled my interest in daily sketching, and the houseplants have become a welcome distraction from the monotony of the Covid lockdowns.” 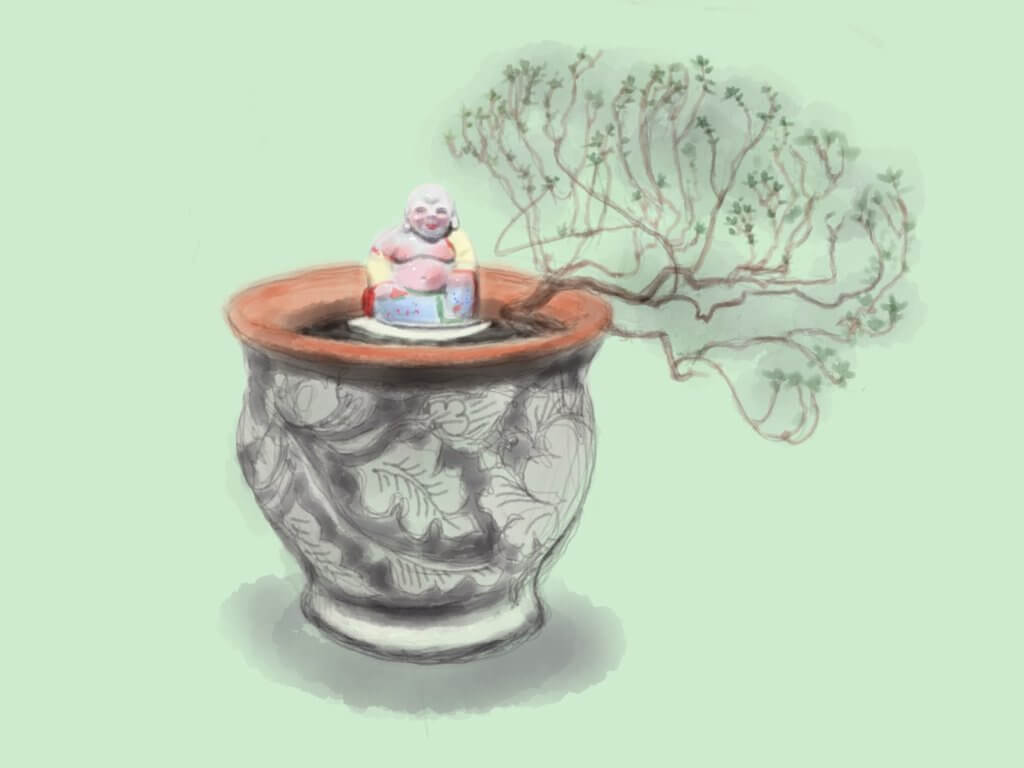 And everyone shows their colors,
black and white,
true blue
or red,
at a time like this.


But there is no time like this
when reality is not a reality show
and no one shows
their real colors
not red, blue
not even green
at a time like this.

What can we do?
What is enough?

We can write.
We can paint.
We can create.
at a time like this.

there will never be 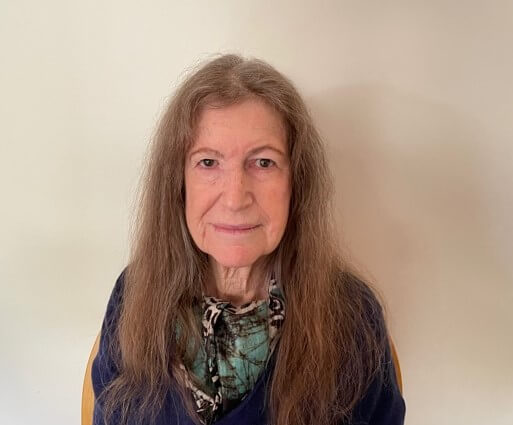 “In a time of tragedy, fear and loss I watched while so many, even my own grandchildren, became involved for the first time to try and make positive changes for others.

I too was moved to contribute in the way I knew I could, by sharing observations of what I saw in our country, the bad and the good, through poetry. I hoped to hold hands with strangers and friends alike, virtually, in a time so many felt so isolated.”

Thomas Terceira is a craftsman and a designer. He has shown his jewelry and enamels nationally and internationally. He has been a designer, sample maker, and model maker years. His collage works have won numerous awards and have been frequently exhibited. He has designed and created jewelry for jewelry manufactures and retailers. He has been creating collage, decoupage and mixed media art work for many years. 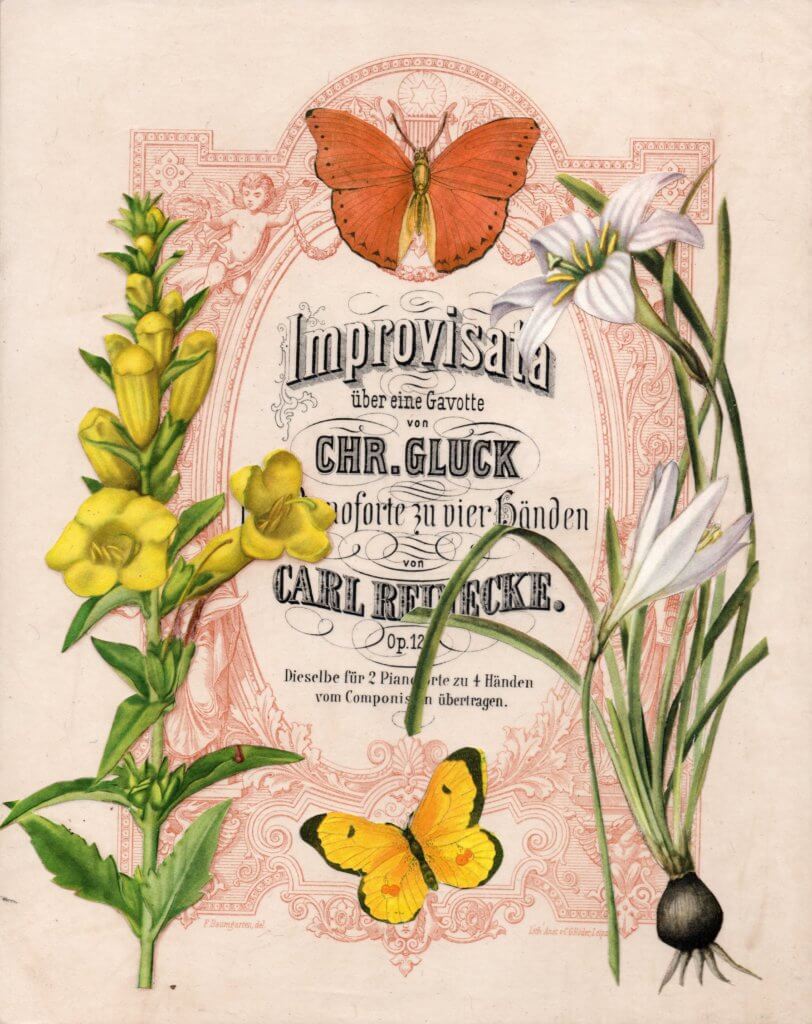 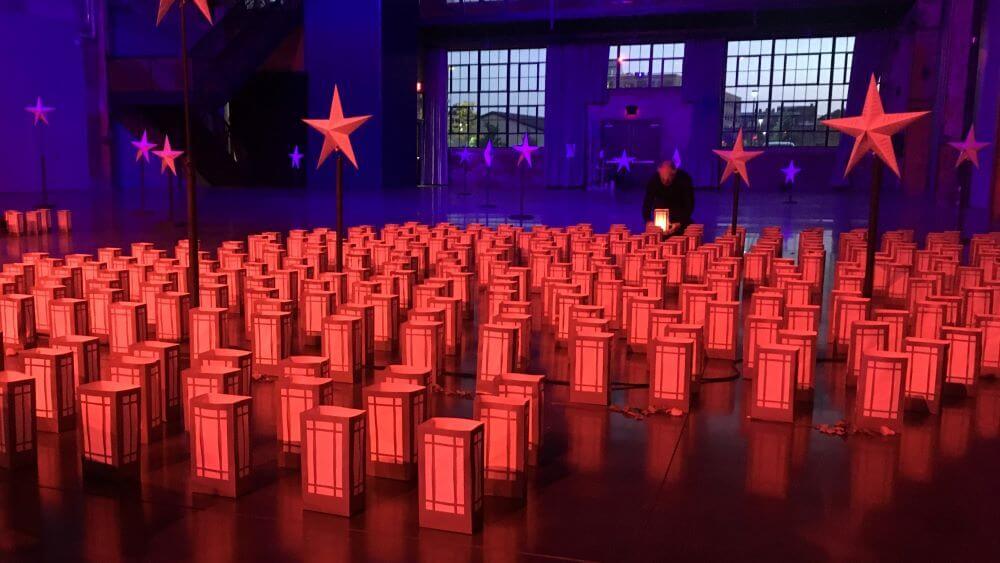 For years, WaterFire has been a regular ritual celebrating downtown Providence, a symbol of the city’s rebirth after decades of decline. In the pandemic, it’s also become a way of memorializing those who have died of COVID-19, through an installation called The Beacon of Hope. Artscape producer James Baumgartner talked with WaterFire’s Executive Artistic Director Barnaby Evans.

"The pandemic gave me the idea of the dance. But then the movement itself, I think, is kind of universal."

"Dance 2020" works to convey some of the emotional states many have felt over the course of this year: anger, fear, and sadness, each represented by a single dancer. 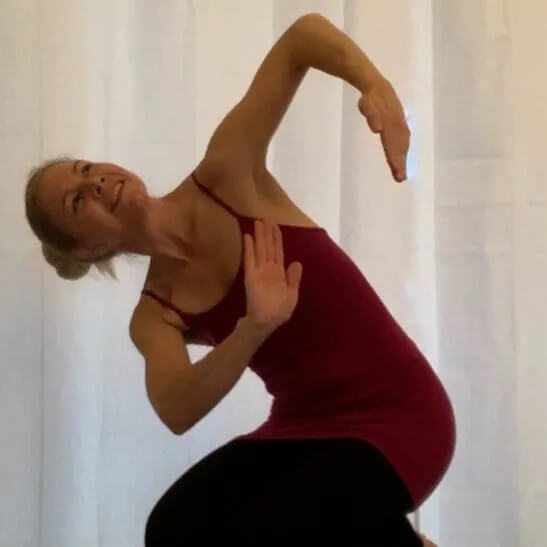 “I created the piece with the social distancing guidelines in mind. Usually dance has a lot of close contact when there’s multiple dancers together. And we couldn’t do that. So I had to get creative in how to make the dance interesting enough without having that close contact involved at all and also not have the dancers so far apart that the audience couldn’t focus on all three at the same time.

Dance is just a different way of communication that can kind of touch you on a more visceral level. So the pandemic gave me the idea of the dance. But then the movement itself, I think, is kind of universal. It didn’t necessarily have to be about the pandemic. It could have been loss or anxiety over a multitude of things, or hope over just about anything.”

– Nancy Reed is a dancer and choreographer in Rhode Island who works with the Balliamo Dance Collective in East Greenwich. “Dance 2020” was created this year, and presented at the Waterfire Arts Center in Providence this summer.

Return to the main Gallery